AIS Annual Board of Directors Meeting 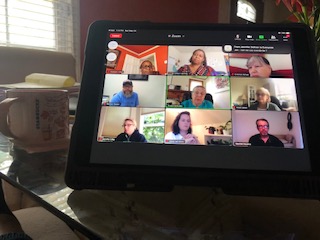 The AIS Board of Directors met via Zoom on November 1, 2020, for our annual meeting. These customarily occur at a meeting room supplied by the conference host, but instead we all got together through the magic of the internet. By this time, most of us had by necessity become Zoom veterans, which made the meeting comfortable, productive and congenial. After approving the previous meeting’s minutes, I made some opening remarks as outgoing president. I think it is pretty common to feel that one could have been more effective during a short term in a leadership role, but there were certainly personal and professional challenges outside of AIS that I faced during my tenure as president, and these diverted and drained my ability to complete all the initiatives I had envisioned. Nonetheless, I was deeply fortunate to be surrounded by such a group of skilled and diligent colleagues. Together, we have expanded the diversity of our organization, both in terms of membership and international scope, updated our web presence and communications technology, found a new home for our journal, and maintained our traditional dedication to promoting interdisciplinarity in all its myriad forms.

The board reviewed the election results, and discussed ways to help orient new board members to our procedures, hearing from Kirsi and Allison, who were our newest additions. We explored models of mentorship, and rekindling our tradition of meeting with the new board at the end of each conference. We reviewed the Financial Director’s report: AIS continues to be financially secure, and we agreed to be fiscally responsible in the midst of an uncertain budget climate in higher education.

Khadijah offered the VP-Relations report. She suggested using telecommunications to facilitate short topical online events throughout the year that would highlight various aspects of interdisciplinary interest, such as interdiversities or our sections areas. These could be led by colleagues both within and outside of AIS membership. Jen and others emphasized the need to continue the work of the board in between our two appointed meetings, and suggested shorter working meetings throughout the year, perhaps on a quarterly basis, or even every other month. Khadijah proposes to have a subcommittee/task force work with Kirsi and Allison to address diversity initiatives. James asked for the task force to create a diversity statement that would go into the Constitution.

Jen presented the VP-Development report. We planned a meeting with the incoming VP- Development, Evan, to generate a list of membership perks. We would then bring our ideas to the entire board at our next “interim” meeting. (These meetings were held on schedule before the publication of this report.) The board renewed its dedication to putting ideas into action. We made some progress in our efforts to develop a new AIS logo. Although there were many suggestions about involving artistically inclined members to design one, in the end we decided to have one designed professionally. Allison suggested that we engage with a minority- or woman-owned business. In the meantime, we will continue to use the logo designed by Marcus. After a detailed discussion over periods of membership, it was decided that we would move to a membership year close to the academic year: September 30-September 29.

Marcus gave the Director of Digital Initiatives report. He was able to give more detailed information about our mass email campaigns and the kinds of responses they receive. Our integrated approach to telecommunications and web services has enabled members to renew memberships more easily, and has generated more revenue. Marcus has created a new Facebook page, not a group, that is open to the general public, which cross-lists with Twitter and Facebook. He created a new AIS members SECTIONS page, and a YouTube channel for AIS, which includes SECTIONS videos. Marcus suggested that we move our listserv from the University of Alabama, an easy technical transition, and load into our G-suite. After discussion, we voted to do so. James suggested that we create a formal digital archive of AIS material, including scholarship of the late Bill Newell, and others. Machiel suggested that we provide links to members’ webpages and research sites on our website.

Sven and Gretchen reported on Issues in Interdisciplinary Studies. Without a large conference this fall, we need to make an extra effort together to ensure that we get a sufficient number of submissions. Announcements will be made at the Sonoma virtual conference. Texas Tech University Press will link to our back issues, but cannot actually store copies on their site. The editors invited ideas for special topics editions of IIS. They are beginning to make use of the newly reconstituted editorial board for peer review, etc. Board expressed their gratitude to the editors for their valuable work and especially for bringing the move to TTUP to fruition, for establishing the Editorial Board and for increasing the frequency to 2 issues a year. James reported on Integrative Pathways, got feedback from the board on the new format using MailChimp. We discussed updating our distribution lists with contact information from our recent conferences, since the newsletter is open to the public and not strictly members.

Marcus reported on our Honors Society. The pandemic has hit AIS honors as well. There are 6 institutional chapters and 121 active student members. We discussed ways to get students to participate in the conferences and encourage more engagement with AIS. The next conference, at Southern Utah University, will emphasize student engagement, which might be useful for the Honors Society. Student presentations, and the feedback process involved in that, worked well during the Amsterdam conference. We could also include online student presentations in the newsletter or website, and showcase undergrad work on the website in a rotating version every few months. Student publications could be fostered and facilitated more, both in the newsletter and in Issues, which would also offer them the experience of going through a publication process.

Heidi gave the Sections report. She shared the videos that Section leaders have prepared to be included on our website. She suggested that we need Sections to be more involved during the year. We discussed the lack of Facebook participation and the need to identify leaders for some Sections, like the First Year Experience Section. Machiel suggested organizing online bimonthly AIS Salons and having Sections facilitate these. This would energize them as well. James suggested that we solicit more material from the Sections for the newsletter as well.

Roz gave reports on upcoming conferences. We discussed ways to gather more accurate membership information from conference registrations. We discussed the then upcoming Sonoma State University conference, including registration figures. We coordinated the announcements and business that would take place there. Sonoma is planning to conduct their original idea for an in- person conference in 2022. We will announce the 2021 conference, hosted by Southern Utah University. There will be a lot of student participation. [Note a recent development: the 2021 AIS Conference, hosted by Southern Utah University, will be completely virtual; more information will be forthcoming in the next few months.] The 2023 conference will be hosted by Texas Tech University. We are still looking for a candidate to host the conference in 2024. It was suggested that that we should hold a conference at an historic black college or university, or in the Global South.

We wrapped up the meeting with a commitment to have a follow-up meeting in December. We will also have a working group to continue our revision of the AIS Constitution and By-laws.