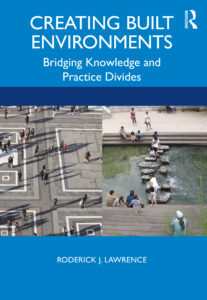 Roderick Lawrence draws upon four decades of experience in both academia and practice (summarized in an enjoyable Postface) to outline a set of strategies for designing more sustainable cities. The book is resolutely transdisciplinary in approach, pointing out often how the best decisions draw on both a range of academic expertise and active involvement of the community. To support reaching such decisions, the book is filled with examples of both exemplary and regrettable urban planning processes.

The first five chapters discuss particular challenges that need to be addressed in designing our cities. While these challenges are addressed sequentially, Lawrence regularly discusses interactions among them.

The first chapter, not surprisingly, argues that more attention should be paid to maintaining natural environments within cities. Lawrence argues that planners often underestimate the benefits of natural areas: these can reduce flooding by absorbing water (and thus protect drinking water supplies), attract and retain tourists, reduce pollution, enhance human health, and increase human happiness. He provides intriguing examples of how communities have been involved in preserving nature in and near cities. These examples include cities such as Singapore, which I had not previously appreciated as being particularly eco-friendly.

The second chapter focuses on health challenges. Proper city design can reduce human exposure to harmful chemicals and biological agents, improve access to health care, enhance psychological wellbeing, encourage healthy lifestyles and outdoor exercise, and reduce poverty.  Empirical research has generally failed to take into account the complexity of these interactions. We thus know far less than we should about, for example, the effect of parks on health. One example provided here is the High Line in New York City, which allows locals to exercise but has also attracted tourists and businesses. Having strolled the High Line (an abandoned elevated railway line) myself, I appreciate that this example has likely been a great investment for the city. Other cities such as Paris have also turned abandoned rail lines and canals into attractive parks. Lawrence further addresses issues of housing for the elderly that can provide security, autonomy, and social contact.  He urges healthier construction in general, especially of apartments, noting that natural ventilation is both energy efficient and healthier than air conditioning.

The third chapter encourages urban food production. Lawrence suggests that people should be connected to the food they eat. And he worries that we under-appreciate the environmental costs of shipping food long distances. He urges rooftop gardens, communal gardens, and vertical farms (again, Singapore is lauded for the last). In addition, he notes that nineteenth century cities often had farms that absorbed fertilizer from horse manure.

The fourth chapter focuses on housing. Lawrence advocates flexible construction methods so that people can design their own homes, and later move walls and doors as their needs change. He also urges communal developments with shared gardens and common rooms and play areas. He could, however, have said more about communal cooking areas which are more common in Europe than North America. In addition, he urges neighborhood diversity.

The fifth chapter urges a forward-looking urban design that copes with future problems and disasters. We should be planning for climate change, he admonishes, including preparation for more severe flooding and storms. He discourages building on lands likely to be flooded. He argues both for numerous small changes and some big changes in how we could design cities to be resilient.

This book is very dense, packed with useful information. Yet, Lawrence communicates very well the complexity of urban design. At least as an ideal: he often laments that developers, politicians, and even many professionals make important decisions without consulting widely or considering many of the concerns raised in the first five chapters. He notes that architects decades ago were interested in social issues but have more recently pursued “design for design’s sake.” The reader might then worry that appropriate urban design is extremely difficult to achieve. Mindful of this challenge, the sixth and seventh chapters turn to process: asking how exactly could and should urban design proceed in order to better meet the various goals outlined in previous chapters.

The sixth chapter explicitly emphasizes the importance of transdisciplinarity. In doing so, it reminds us many different types of expertise are required, including the knowledge residents of cities possess about what works and what doesn’t, as well as what they need. Chapter 7 makes a key argument about flexibility: Given the complexity of urban planning, we need to be ready to adjust plans as we move along. For the same reason we also need to learn from efforts in other cities, asking what worked well and what do they wish they had done differently? Lawrence’s book, with its numerous examples, serves as a catalogue of lessons that urban designers can draw upon, but the imperative of transdisciplinarity means any urban design project should involve people who have worked on similar projects in other cities. In addition, Lawrence reviews dialogue methods developed by scholars of transdisciplinarity, discusses the value of both physical models and flowchart diagrams, and notes [all too briefly] that we need to encourage creativity. He encourages both forecasting future needs and backcasting: identifying where we want to go and then figuring out how to get there.

While modern cities face a host of challenges, they likewise have great opportunities. Lawrence urges us to imagine future cities that are healthier, more environmentally sustainable, and inviting. He points to the many examples he provides of successful planning as potential harbingers of a brighter future. He also urges all involved, but especially professionals, to reconceive the process of urban development.

This book offers many valuable insights, though I have a couple of quibbles. Despite decades as an interdisciplinary scholar, my training as an economist leads me to worry about costs as well as benefits. Lawrence does discuss costs at times but devotes much more attention to benefits. I very much agree that we can and should build healthier cities with more assimilation of nature and a greater sense of community. But we need to recognize a tradeoff: if we want parks and gardens, then we need either to have greater density in housing or commute longer distances. It is no easy task to identify the best balance. And this balance will shift: if for example, the pandemic has a lasting effect in allowing more work from home, then we must imagine a future when more people can live among nature and only rarely commute to work.

Speaking further of costs, we should not ignore the costs of all those meetings. Gathering diverse interests together to address dozens of inter-related issues is no easy task. This is one reason we need to learn as much as possible from efforts in different cities. I have sat through far too many committee meetings in my life – both inside and outside the university – to imagine this process will ever be painless. Hence, I applaud Lawrence and others for developing techniques to facilitate a collaborative approach to complex decision-making, while cautioning that we can never lose sight of how time-consuming such a process will be.

That being the case, there may also be more scope for providing better incentives to developers. Mindful of this need, Lawrence worries that deregulation since the 1980s in many countries has steered developers further away from satisfying the goals he has outlined. The economist in me wonders: if markets do not adequately account for environmental and health impacts or prepare us for the future, then financial incentives/penalties that encourage developers to take such matters into account are needed. For instance, it should be extremely costly to insure development on a floodplain. We might still force development plans through a review process but might find that developers often come up with good ideas themselves.

A final critique is that there is little attention to aesthetics. I appreciate Lawrence’s concern that architects focused on appearance can too easily ignore other key societal goals. Yet, one of the most obvious characteristics of modern cities is that they are often ugly. Yet the world is full of examples of buildings and neighborhoods that are attractive to look at and fit well with their environment. It is worth exploring then how much it would cost to make our cities look better – and understanding the psychological benefits of attractive surroundings. We could look both at encouraging more attractive architecture and encouraging more public art and flower gardens.

I stress that these are quibbles. This book should inspire us to believe that we can fashion better cities and gives us much advice on how to do so. Along the way, it highlights the value of transdisciplinarity, and provides a lot of guidance on how to implement this.